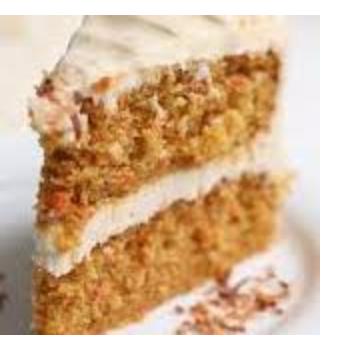 In a large bowl, whisk together the flour, baking powder, baking soda, cinnamon, nutmeg. In a separate bowl, whisk together the coconut oil or butter, egg whites, and vanilla. Stir in the Greek yogurt, mixing until no large lumps remain. Mix in the maple syrup. Alternate between adding the flour mixture and the milk, beginning and ending with the flour mixture, and stirring just until incorporated. Gently fold in the carrots.

Divide the batter between the prepared pans. Bake at 350°F for 24-28 minutes, or until the center feels firm to the touch and a toothpick inserted into the center comes out clean. Cool in the pans for 10 minutes before inverting, peeling off the wax paper, and transferring to wire racks to cool completely.

To prepare the frosting, add the Greek yogurt, Greek yogurt cream cheese, and maple syrup to a medium bowl, and beat with an electric mixer until smooth.

To assemble the cake, spread a generous dollop of frosting on top of one of the cake layers. Place the second layer on top. Frost the tops and sides.