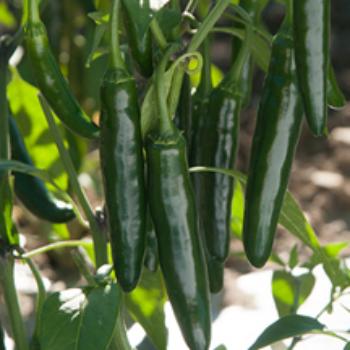 Before you start drying peppers please take the following precautions:

If you're drying peppers indoors, keep the area well-ventilated. Warmed peppers will give off pungent fumes that are irritating to the eyes. If you have a ceiling fan, use it; or better yet, open your windows and bring in a portable fan or two to keep the air circulating and minimize the watery eyes and burned nasal passages. Take extra precaution around young children, pets, or anyone who is sensitive to spicy foods.

If possible, always wear gloves when handling hot peppers. Be sure to wash your hands thoroughly after touching hot peppers. Do not scratch your eyes, nose, face, or any other sensitive area of your body after handling.

Another good way of drying chile peppers outdoors is to hang them from a string. Grab some whole peppers with the stems still on, take a long, sharp needle, and string them together with strong thread or fishing line through their stems.

Unlike decorative ristas (which clump several hanging chiles together in a tighter space), you'll need to leave plenty of room in between peppers for proper airflow. At one end of the string, tie a small stick or wooden dowel to prevent the peppers from sliding off. Hang up your strand of peppers securely in an area where they'll get plenty of sunlight and fresh air. It can take up to two weeks of drying time in good weather.

Properly dried peppers should be devoid of any signs of moisture or soft "fleshiness". Fully dried peppers can still retain a bit of flexibility in their skin - you don't have to dry them until they're brown, crumbling, or hard as a rock. But when in doubt, the pepper should be uniformly dry, slightly brittle, and have a tough skin.

Separate them by pepper type and store them in high-quality Ziploc-type plastic bags or plastic containers. This way you'll always have a handy supply of dried peppers to use in sauces, soups, and other dishes.

Crush them in a food processor, blender, or spice mill and create a chile pepper seasoning.

Serranos are generally eaten fresh and are a key ingredient in salsa and other Mexican dishes.  Freezing - normally, vegetables are blanched before freezing, but serranos are fairly thin walled, so  just put the green or red peppers in a food storage bag and toss them into the freezer. Easy to remove from the bag and thaw.  Other Hot Pepper varieties can also be frozen using the same method.

How to Roast & Freeze Habanero and Serrano Peppers

Preheat the oven to "broil."

Wash the peppers under cool running water and dry them off with paper towels.

Slice the stems off the peppers and cut them in half length-wise.

Scrape out the seeds with the knife and discard them.

Set the peppers onto a broiling pan or baking sheet with the skin facing up in a single layer.

Slide the pan into the oven and allow them to cook for 10 minutes.

Remove the peppers from the oven. Use tongs to pick them up and drop them into a small paper bag or plastic container with a lid. Seal up the bag or container to trap the heat inside.

Leave the peppers in the bag or container for 15 to 20 minutes.

Take the peppers out and peel away the skins and discard them. They will still be hot from the oven so use caution. It may be helpful to lay them out onto a plate and allow them to cool enough to touch first.

Arrange the peeled roasted peppers onto a wax paper lined cookie sheet in a single layer.

Set the cookie sheet into the freezer and leave it there for 30 minutes to an hour.

Remove the cookie sheet from the freezer and place the peppers into a freezer bag.

Place the bag into the freezer marked with the date. Use a permanent marker to write on the plastic.

Pick your own FLOWERS