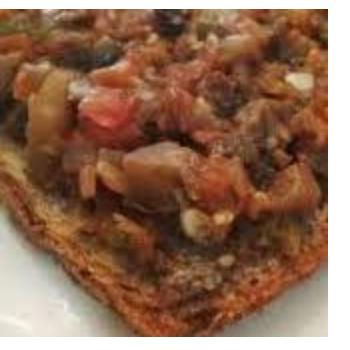 Heat the oven to 425 degrees. Bake the eggplant on a baking sheet in the center of the oven, turning it over once or twice, until it is soft and its skin is charred and blistered, about 1 hour.

In a skillet, cook the onions in 4 tablespoons oil over medium heat until they are soft but not brown, 6 to 8 minutes. Stir in the green pepper and garlic and cook, stirring occasionally, for 5 minutes longer. With a rubber spatula, scrape the contents of the skillet into a mixing bowl.

Chop the eggplant pulp into a mixing bowl and stir in the tomatoes, sugar, salt and a few grindings of black pepper. Mix together thoroughly. Heat the remaining 2 tablespoons oil in the skillet over moderate heat and pour in the eggplant mixture. Bring to a boil, stirring constantly, then turn the heat to low, cover the skillet, and simmer for 1 hour.

Uncover and cook 30 minutes, stirring from time to time, until all the moisture in the pan has evaporated and the mixture is thick enough to hold its shape in a spoon. Stir in 2 tablespoons lemon juice and taste for seasoning, adding salt, pepper and lemon juice to taste. Transfer the “caviar” to a mixing bowl and chill, covered with plastic wrap, until ready to serve. Serve on squares of bread or on sesame-seed crackers.